Big businesses, especially those with their eye on the oil and hands around our throats, and corruption in government are just controlling us like crazy. I just came across this movie (thanks, Logan!) trailer. Watch it. It’s crazy how oil controls the future of all of us and the future of this planet that we’re borrowing (and destorying in the process). Check it: 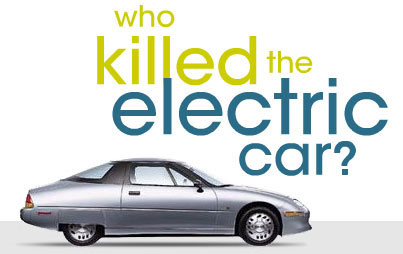 It was among the fastest, most efficient production cars ever built. It ran on electricity, produced no emissions and catapulted American technology to the forefront of the automotive industry. The lucky few who drove it never wanted to give it up. So why did General Motors
crush its fleet of EV1 electric vehicles in the Arizona desert?

WHO KILLED THE ELECTRIC CAR? chronicles the life and mysterious death of the GM EV1, examining its cultural and economic ripple effects and how they reverberated through the halls of government and big business.

The year is 1990. California is in a pollution crisis. Smog threatens public health. Desperate for a solution, the California Air Resources Board (CARB) targets the source of its problem: auto exhaust. Inspired by a recent announcement from General Motors about an electric vehicle prototype, the Zero Emissions Mandate (ZEV) is born. It required 2% of new vehicles sold in California to be emission-free by 1998, 10% by 2003. It is the most radical smog-fighting mandate since the catalytic converter.

With a jump on the competition thanks to its speed-record-breaking electric concept car, GM launches its EV1 electric vehicle in 1996. It was a revolutionary modern car, requiring no gas, no oil changes, no mufflers, and rare brake maintenance (a billion-dollar industry unto itself). A typical maintenance checkup for the EV1 consisted of replenishing the windshield washer fluid and a tire rotation.

But the fanfare surrounding the EV1â€™s launch disappeared and the cars followed. Was it lack of consumer demand as carmakers claimed, or were other persuasive forces at work?

Fast forward to 6 years later… The fleet is gone. EV charging stations dot the California landscape like tombstones, collecting dust and spider webs. How could this happen? Did anyone bother to examine the evidence? Yes, in fact, someone did. And it was murder.

The electric car threatened the status quo. The truth behind its demise resembles the climactic outcome of Agatha Christieâ€™s Murder on the Orient Express: multiple suspects, each taking their turn with the knife.

WHO KILLED THE ELECTRIC CAR? interviews and investigates automakers, legislators, engineers, consumers and car enthusiasts from Los Angeles to Detroit, to work through motives and alibis, and to piece the complex puzzle together.

WHO KILLED THE ELECTRIC CAR? is not just about the EV1. Itâ€™s about how this allegory for failureâ€”reflected in todayâ€™s oil prices and air qualityâ€”can also be a shining symbol of societyâ€™s potential to better itself and the world around it. While thereâ€™s plenty of outrage for lost time, thereâ€™s also time for renewal as technology is reborn in WHO KILLED THE ELECTRIC CAR?